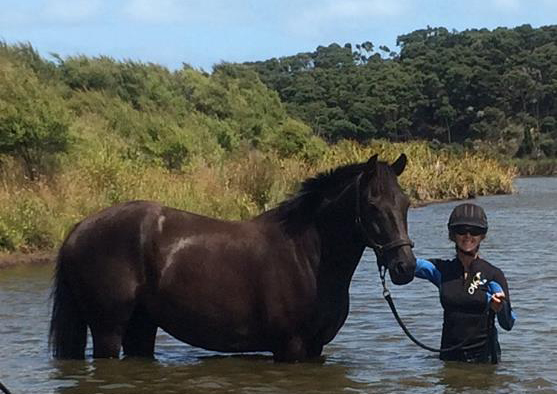 Calm, but suspicious, to catch so picked out feet in the paddock.  Front feet – no issue, debated what to do with lead rope when I picked out his back feet – decided safest place was around his neck – WRONG!  His paddock mate left and so did he…fine to re-catch and help rope to pick out back feed this time with now issue.  LEARNING – doesn’t ground tie and need contact with lead rope and all times.

In walk I can lead him and remind him to keep his head down thus lift his back.  I can see his gullet relax and swing and his splenius muscle pump up which indicates he is also using the muscles under the saddle (if he had one on which he doesn’t and won’t until I can tick all of the above in ‘current focus’ consistently) .I tried to lunge him at trot and one of three things happened

So I can take lunging off the list for now as he doesn’t have the confidence in himself  or lunge training to maintain a body posture that will help build his strength and symmetry.

I have a suspicion that his past horsemanship training is not helping him here as he is trained to disengage the hindquarters to stop and since straightness is part of my goals I need to work around this.  Luckily I know which method he has been trained in as I have learnt this too so I need to up my game to anticipate how he will react to certain cues.

So, today I spent a lot of time rubbing the bamboo gently all over his body until he did a big sigh (great sign of relaxation).  I then set a mini-goal of getting him to move straight in trot.

I got him moving around the edge of the arena in walk using the 2.4m bamboo as a moving fence between me and him (parallel with his body) to combat the following directly behind me impulse and the rushing.

When he was relaxed in walk and we has some straight space in front I did a few steps of trot with the hand holding the lunge rein positioned close to the loop on the nose of the serreta to keep his head and neck straight and not turn his head to me constantly – he is fine in walk so it’s just the extra energy of the trot that gets him looking to me for me support. Once he got the idea I was able to remove my hand from his nose and he trotted softly beside me for a few steps – yah!

I felt safer since he wasn’t stalking right behind me and I felt more able to regulate his pace and his head position. I am also going to get a lot fitter running beside him…

When I tell him what a clever boy he is he drops his heads so his forehead is level with my solar plexius and love a scratch and pat – positive feedback really is the elixir to learning.

Curious about your Animal Friend's Point of View? Find out with a FREE mini-Communication

Step 1: Sign up & be taken to a form where you send me your question & a photo of your horse, dog, cat, budgie, llama...I love chatting with all of them!
Step 2: I email you their insights

I will never spam you or give anyone your email and you can unsubscribe right after you get your insights if you don't want to hear from me again. | Privacy Policy